Salzburg is the fourth-largest city in Austria and the capital of the federal state of Salzburg.

Salzburg's "Old Town" (Altstadt) is internationally renowned for its baroque architecture and is one of the best-preserved city centers north of the Alps. It was listed as a UNESCO World Heritage Site in 1997. The city has three universities and a large population of students. Tourists also frequent the city to tour the city's historic center, many palaces, and the scenic Alpine surroundings.

Salzburg was the birthplace of 18th-century composer Wolfgang Amadeus Mozart. In the mid‑20th century, the city was the setting for the musical play and film The Sound of Music.

Salzburg is on the banks of the Salzach River, at the northern boundary of the Alps. The mountains to Salzburg's south contrast with the rolling plains to the north. The closest alpine peak, the 1,972‑metre-high Untersberg, is less than 16 kilometres (10 miles) from the city centre. The Altstadt, or "old town", is dominated by its baroque towers and churches and the massive Festung Hohensalzburg. This area is surrounded by two smaller mountains, the Mönchsberg and Kapuzinerberg, which offer green relief within the city. Salzburg is approximately 150 km (93 mi) east of Munich, 281 km (175 mi) northwest of Ljubljana, Slovenia, and 300 km (186 mi) west of Vienna.

Salzburg is part of the temperate zone. The Köppen climate classification specifies the climate as continental (Dfb). Due to the location at the northern rim of the Alps, the amount of precipitation is comparatively high, mainly in the summer months. The specific drizzle is called Schnürlregen in the local dialect. In winter and spring, pronounced foehn winds regularly occur. 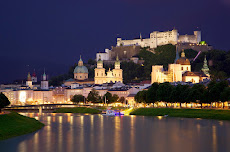 Salzburg is a tourist favorite, with the number of tourists outnumbering locals by a large margin in peak times. In addition to Mozart's birthplace noted above, other notable places include:

Historic Centre of the City of Salzburg, declared a World Heritage Site in 1996
Baroque architecture, including many churches
Salzburg Cathedral (Salzburger Dom)
Hohensalzburg Castle (Festung Hohensalzburg), overlooking the Old Town, is one of the largest castles in Europe
Franciscan Church (Franziskanerkirche)
St Peter's Abbey with the Petersfriedhof
Nonnberg Abbey, a Benedictine monastery
Salzburg Residenz, the magnificent former residence of the Prince-Archbishops
Residenzgalerie, an art museum in the Salzburg Residenz
Mozart's Birthplace
Mozart's Residence
University Church
Siegmundstor (or Neutor)
Getreidegasse
Sphaera, a sculpture of a man on a golden sphere (Stephan Balkenhol, 2007)

Outside the Old Town

Mirabell Palace, with its wide gardens full of flowers
St. Sebastian's cemetery (Sebastiansfriedhof)
Schloss Leopoldskron, a rococo palace and national historic monument in Leopoldskron-Moos, a southern district of Salzburg
Hellbrunn with its parks and castles
The Sound of Music tour companies who operate tours of film locations
Hangar-7, a multifunctional building owned by Red Bull, with a collection of historical airplanes, helicopters and Formula One racing cars

Anif Castle, located south of the city in Anif
Shrine of Our Lady of Maria Plain, a late Baroque church on the northern edge of Salzburg
Salzburger Freilichtmuseum Großgmain, an open-air museum containing old farmhouses from all over the state assembled in an historic setting
Schloss Klessheim, a palace and casino, formerly used by Adolf Hitler
Berghof, Hitler's mountain retreat near Berchtesgaden
Kehlsteinhaus, the only remnant of Hitler's Berghof
Salzkammergut, an area of lakes east of the city
Untersberg mountain, next to the city on the Germany-Austria border, with panoramic views of Salzburg and the surrounding Alps
Skiing is an attraction during winter. Salzburg itself has no skiing facilities, but it acts as a gateway to skiing areas to the south. During the winter months its airport receives charter flights from around Europe.
Salzburg Zoo, located south of the city in Anif

The Salzburg Festival is a famous music festival that attracts visitors during the months of July and August each year. A smaller Salzburg Easter Festival is held around Easter each year.
The Europrix multimedia award takes place in Salzburg.

In the 1960s, the movie The Sound of Music used some locations in and around Salzburg and the state of Salzburg. The movie was based on the true story of Maria von Trapp who took up with an aristocratic family and fled the German Anschluss. Although the film is not particularly popular nor well known among Austrians, the town draws many visitors who wish to visit the filming locations, alone or on tours.

Salzburg is the setting for the Austrian crime series Stockinger.

In the 2010 film Knight & Day, Salzburg serves as the backdrop for a large portion of the film.