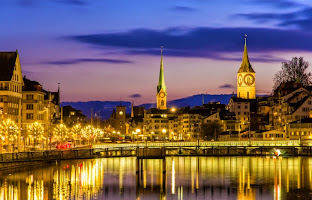 Zürich or Zurich is the largest city in Switzerland and the capital of the canton of Zürich. It is located in north-central Switzerland at the northwestern tip of Lake Zürich. The municipality has approximately 400,028 inhabitants, and the Zurich metropolitan area 1.83 million. Zürich is a hub for railways, roads, and air traffic. Both Zürich Airport and railway station are the largest and busiest in the country.

The official language of Zürich is (the Swiss variety of Standard) German, but the main spoken language is the local variant of the Alemannic Swiss German dialect.

Zürich is a leading global city and among the world's largest financial centres despite a relatively low population. The city is home to a large number of financial institutions and banking giants. Most of Switzerland's research and development centres are concentrated in Zürich and the low tax rates attract overseas companies to set up their headquarters there.

Monocle's 2012 "Quality of Life Survey" ranked Zürich first on a list of the top 25 cities in the world "to make a base within". According to several surveys from 2006 to 2008, Zürich was named the city with the best quality of life in the world as well as the wealthiest city in Europe.

Many museums and art galleries can be found in the city, including the Swiss National Museum and the Kunsthaus. Schauspielhaus Zürich is one of the most important theatres in the German-speaking world. 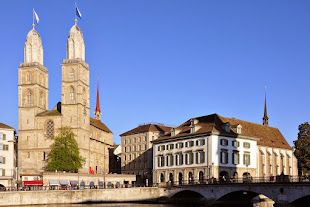 Zürich is Switzerland's biggest tourist destination and was in the «Lonely Planet» guide book's top ten of best places to visit around the world. The City of Zürich offers visitors from Switzerland and abroad a wide variety of cultural and sporting opportunities to enjoy with various events and public festivals taking place throughout the year.

If you ask someone from Zurich which of the city’s sights represents Zurich best, they’ll probably point to the Grossmünster, its unmistakable double towers making it the closest Zurich has to a landmark. Wasserkirche and Fraumünster complete the trinity of famous churches. Lindenhof is where Zurich started off and is a lovely spot today, while the central police station is another unlikely lovely spot - unless maybe you’re escorted there. Its entrance hall is splendidly decorated with work by Augusto Giacometti. But two of Zurich’s major attractions are not man-made at all: the lake and the Uetliberg peak.

Zürich as a tourist destination

Zürich certainly has plenty to offer: an active cultural scene with over 50 museums and more than 100 galleries, top hotels and restaurants, a shopper's paradise with international labels and urban Zürich brands as well as a vibrant night-life. There is also a whole host of lake and riverside bathing areas in the heart of the city while the hilly, green countryside nearby is perfect for walks. Zürich is also a leading knowledge and business location which is widely appreciated for its good accessibility and excellent infrastructure.