Zell am See is the administrative capital of the Zell am See District in the Austrian state of Salzburg. The town is an important tourist destination known as Zell am See-Kaprun and is a transportation hub for the region.

The Zell Valley is a corridor in the Kitzbühel Alps, connecting the Saalfelden Basin of the Saalach River in the north and the Salzach in the south. Zell am See is located approximately 100 km (62 mi) east of Innsbruck and 30 km (19 mi) north of Mt. Grossglockner. The Old Town (Altstadt) centre of Zell am See is located on the western shore of 68-metre (223 ft) deep Lake Zell, with the villages of Thumersbach to the east, Erlberg to the southeast, and Schüttdorf directly to the south.

Zell am See in Video: 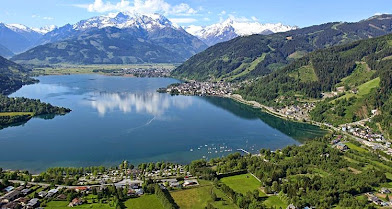 The original Lake Zell reached somewhat further to the north and extended south to the Salzach river. The dimensions of the lake, however, have changed over time into marsh areas. The lake has the shape of a peanut, with an area of 4.7 square kilometres (1.8 sq mi).

The mountains of the area form a horseshoe shape, the slopes are mainly forested or covered with Alpine pastures. The Hausberg ("home mountain") of Zell am See is the Schmittenhöhe, 1,965 m (6,447 ft), which together with the adjacent Salzburg Slate Alps range in the west is part of the Greywacke zone between Northern Limestone and Central Eastern Alps. Mt. Schmittenhöhe is a popular centre for skiing and winter sports. The nearby Mt. Hundstein ("Dog Stone") at 2,117 metres (6,946 ft) is the highest peak of the Salzburg Greywacke Zone.

Zell am See provides winter skiing on the above Schmittenhohe Mountain, the skiable area is approximately 138 km including the pistes on the Kitzsteinhorn and kaprun maiskogel. The ski pass covers the whole area including transport to and from the glacier which is open most of the year snow dependent. Zell am See is a low altitude ski area and snow cover can suffer from the temperature but the glacier has snow cover most of the year.

Within St. Hippolyte's Church are the oldest known building remnants of the Pinzgau region. The church is built in a mostly Romanesque style and consists of three naves. Before 1794, the central nave was crowned with a Gothic vault, but in that year it was replaced with another vault, which in turn was replaced by a flat wooden roof in 1898. Four steps lead up to the main altar, but the crypt has been filled in. The narthex and aisles are still Gothic, but some of the other Gothic objects (like the neogothic altars by Josef Bachlehner) were added during the renovation in 1898, when also the baroque furnishings of preceding centuries were removed.

The highpoint of the church is its elevated walkway with its ornate parapet, built in 1514. The walkway rests on four carved columns of precious marble, in between which an intricate net-vault is spun. The three pointed arches are crowned with crockets, and end in pointed towers. Between the arches are Gothic baldachins with cut-out figures of St. Hippolyte and St. Florian, originating from 1520.

The tower is the main focus of the Zell am See skyline. It has a height of 36 metres (118 ft). The strong walls have a limestone exterior.

From 1660 until 1670, the main altar was replaced by a Baroque one, which was removed again in 1760. Almost none of the Baroque furnishings of the church remain apart from some adornments. Two Baroque statues ended up in the church of Prielau. Next to the main altar are two statues dating from 1480: St. Rupert and St. Vigilius. The side altar contains an image of the Virgin Mary from the now non-existent Church of Maria Wald, which dates from 1540. The left nave has a small altar dedicated to St. Sebastian in its apsis.

The Grand Hotel Zell am See is situated in a unique position on a private peninsula right at the shore of Lake Zell - this large chalet is surrounded by water with a panoramic view of the mountains.

The Porsche family farm is located in Zell am See, having been obtained in 1939 by the senior Ferdinand Porsche in anticipation of the war. During the war, he transferred some of his business operations here and to Gmund, away from Stuttgart where, notwithstanding the heavy bombing, his son Ferry Porsche remained to oversee plant operations.

Album of Zell am See: