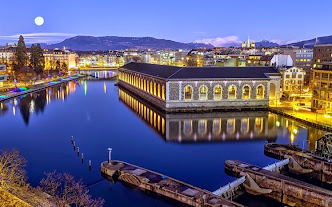 Geneva is a global city, a financial center, and worldwide center for diplomacy due to the presence of numerous international organizations, including the headquarters of many of the agencies of the United Nations and the Red Cross. Geneva is the city that hosts the highest number of international organizations in the world. It is also the place where the Geneva Conventions were signed, which chiefly concern the treatment of wartime non-combatants and prisoners of war.

Geneva was ranked as the world's ninth most important financial centre for competitiveness by the Global Financial Centres Index, ahead of Frankfurt, and third in Europe behind London and Zurich. A 2009 survey by Mercer found that Geneva has the third-highest quality of life of any city in the world (behind Vienna and Zurich for expatriates; it is narrowly outranked by Zurich). The city has been referred to as the world's most compact metropolis and the "Peace Capital". In 2009 and 2011, Geneva was ranked as, respectively, the fourth and fifth most expensive city in the world.

Geneva is located at 46°12' North, 6°09' East, at the south-western end of Lake Geneva, where the lake flows back into the Rhône River. It is surrounded by two mountain chains, the Alps and the Jura.

The climate of Geneva is temperate, oceanic (Köppen: Cfb). Winters are cool, usually with light frosts at night and thawing conditions during the day. Summers are pleasantly warm. Precipitation is adequate and is relatively well-distributed throughout the year, although autumn is slightly wetter than the other seasons. Ice storms near Lac Léman are quite normal in the winter. In the summer many people enjoy swimming in the lake, and frequently patronise public beaches such as Genève Plage and the Bains des Pâquis. Geneva, in certain years, receives snow in the colder months of the year. The nearby mountains are subject to substantial snowfall and are suitable for skiing. Many world-renowned ski resorts such as Verbier and Crans-Montana are just over two hours away by car. Mont Salève (1400 m), just across the border in France, dominates the southerly view from the city centre. The famous Mont Blanc is visible from most of the city, enclosed in the mountain alp range surrounding nearby Chamonix, which is one of the closest French skiing destinations to Geneva.

The opera house, the Grand Théâtre de Genève, which officially opened in 1876, was partly destroyed by fire in 1951 and reopened in 1962. It has the largest stage in Switzerland. It features opera and dance performances, recitals, concerts and, occasionally, theatre. The Victoria Hall is used for classical music concerts. It is home of the Orchestre de la Suisse Romande.

Every summer, the Fêtes de Genève (Geneva Festival) are organised in Geneva. According to the Radio télévision suisse, in 2013, hundreds of thousands of people came to Geneva to see the annual one-hour long grand firework display of the Fêtes de Genève

Museums and art galleries are everywhere in the city. Some are related to the many international organizations as the International Red Cross and Red Crescent Museum or the Microcosm in the CERN area. The Palace of Nations, home of the United Nations headquarters, can also be visited. 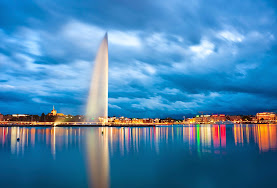 Among the most popular sports in Switzerland is ice hockey. Geneva is the home of the Genève-Servette HC, who play in the Swiss National League A. In 2008 and 2010, the team made it to the league finals but lost to the ZSC Lions and SC Bern respectively.

There is also a football team in Geneva. The Servette FC is a football club founded in 1890 and named after a borough on the right bank of the Rhône. The home of Servette is Stade de Genève. Servette play in the Swiss Challenge League. It was relegated to the third division in 2004-2005 due to a bankruptcy and was promoted to the Swiss Challenge League after the 2005-2006 season, where the club remained until 2011. Servette earned promotion to the Swiss Super League after defeating Bellinzona in a relegation/promotion playoff on 31 May 2011 and have since re-established themselves in the elite of Swiss football. The club finished fourth in its first season back in the top flight, thereby gaining entrance to the Europa League second round qualification round for the 2012-13 season. Servette won 17 Swiss championship titles.

Canadian citizen Hugh Quennec is President of both clubs.

Read 2526 times Last modified on Thursday, 07 May 2015 14:51
Tweet
Published in Travel Assistance
More in this category: « Zell am See Tour Interlaken Tour »
Login to post comments
back to top