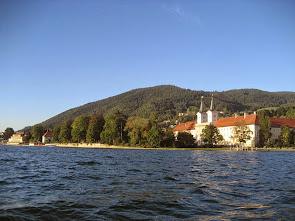 The Tegernsee is a Zungenbecken lake in the Bavarian Alps in southern Germany. The lake is the centre of a popular recreation area 50 kilometres (31 mi) south-east of Munich. Resorts on the lake include the eponymous Tegernsee, as well as Bad Wiessee, Kreuth, Gmund, and Rottach-Egern.

The lake flows into the River Mangfall, a tributary of the River Inn and thence the River Danube.

The buildings of the former Benedictine monastery of Tegernsee Abbey lie on the banks of the lake. Now in private hands, they are now known as Schloss Tegernsee.

The area around the lake is linked to Munich by rail through trains of the Bayerische Oberlandbahn, which, in the final part of their journey, travel over the tracks of the privately owned Tegernsee-Bahn. Pleasure boat services serve several points on the lake, and are operated by boats of the Bayerische Seenschifffahrt company.

With the train (stations at Gmund am Tegernsee and the city Tegernsee) or the car (highway A8 and normal streets) you need a little less than an hour from the center of Munich to the lake Tegernsee.

The lake Tegernsee has to bigger Bays and one island. The river Mangfall leaves the lake in the northern end of the Tegernsee at Gmund. Like many other lakes in Bavaria, the lake Tegernsee is a popular location for watersports and leisure time.