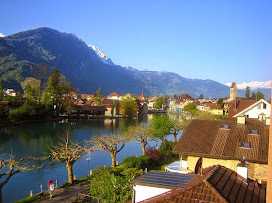 Interlaken is a town and municipality in the Interlaken-Oberhasli administrative district in the Swiss canton of Bern. It is an important and well-known tourist destination in the Bernese Oberland region of the Swiss Alps, and the main transport gateway to the mountains and lakes of that region.

The town is located on the Bödeli, between Lake Thun and Lake Brienz, and alongside the Aare river that flows between the two lakes. Transport routes to the east and west alongside the lakes are complemented by a route south into the mountains following the Lütschine river.

The blazon of the municipal coat of arms is Argent a Semi Ibex rampant couped Sable langued Gules.

Interlaken's reputation as international resort started around 1800 due to the landscapes of Franz Niklaus König and other Swiss landscape artists. The success of the Unspunnenfest, a festival of Swiss culture, in 1805 and 1808 brought many tourists to Interlaken. Starting in 1820, they came for mountain air and spa treatment and the large Kursaal opened in 1859 to provide an elegant spa. The many hotels combined with good transportation links made it easy for these early tourists to visit. In 1835 a steam ship route opened along Lake Thun from Thun, followed in 1839 by another along Lake Brienz from Brienz.

In 1872, the Bödelibahn railway opened from Därligen, on Lake Thun, to Interlaken. Two years later it was extended to Bönigen, on Lake Brienz. Initially this line was unconnected to the rest of the Swiss railway system, and served as a link between the steamships on both lakes. However in 1893, the Thunersee railway opened alongside Lake Thun providing a direct rail connection to Thun, with onward connections to Bern and beyond. In 1888, the Brünig railway opened between Alpnachstad, on Lake Lucerne, and Brienz, on Lake Brienz, thus providing a through steamer and rail connection from Interlaken to Lucerne. By 1916, the Brünig railway had reached Interlaken from Brienz, and, together an earlier extension at its eastern end, provided a direct rail route to Lucerne. In 1890, the Berner Oberland railway connected Interlaken to the tourist destinations of Lauterbrunnen and Grindelwald.

With the opening up of transport links, hotels developed along the route to the Jungfrau. In 1860-75 and 1890-1914 several luxury hotels were built with views of the Jungfrau and surrounding mountains. The current Kursaal was built in 1898-99 and remodeled in 1909-10.

Climate in this area has mild differences between highs and lows, and there is adequate rainfall year round. The Köppen Climate Classification subtype for this climate is "Cfb" (Marine West Coast Climate/Oceanic climate). 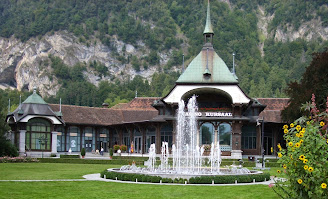 The town is principally a base from which to explore the surrounding areas. Among the main attractions are the mountains of the Jungfrau region, including the Jungfrau, (4,158 m (13,642 ft)), the Mönch (4,107 m (13,474 ft)) and the Eiger (3,970 m (13,020 ft)). Whilst the peaks of these mountains are accessible only to mountaineers, a sequence of connecting mountain railways gives access to the Jungfraujoch, a coll (3,450 m (11,320 ft)) between the Jungfrau and the Mönch, which is the highest point in Europe reachable by train.

Closer to Interlaken, the Harder Kulm (1,322 m (4,337 ft)), just to the north of the town, and the Schynige Platte (2,076 m (6,811 ft)), just to the south, are also accessible by railway, and provide extensive views of the higher mountains. Lake Thun and Lake Brienz are both close to the town, and the Aar river flows through the town. Boat trips operate on both lakes, serving various lakeside towns. One of these, Brienz, is the starting point for Switzerland's last remaining steam operated mountain railway, the Brienz-Rothorn railway.

Jungfrau Park, an amusement park, is situated just to the south of Interlaken. It was originally opened as Mystery Park, a paranormal-based theme park owned by author Erich von Däniken, but was closed in 2006 after three years because of financial difficulties. It re-opened in its current guise in 2009.

Interlaken has a large selection of hotels of various grades, many of which are located along the Höheweg, a street that links the towns two railway stations and offers views of the mountains. Other hotels are clustered around one or other of the two stations, or located across the river in the neighbouring municipality of Unterseen.

Interlaken is also a destination for backpackers. It has numerous backpacker-friendly hotels and companies providing guided services in skydiving, canyoning, hang gliding, paragliding, and skiing.